Continuing our series of articles on Google Ads Shopping campaigns, and as a follow up to our recent focus on Ad Extensions in Google Shopping Campaigns in February, we now take a look at advertisers can take more control over the limited way the campaign bids can be managed, by using two optional settings.

Once a new Smart Shopping campaign has been set up, much of the bid management is left to Google’s automated system, which uses the activity data over time to develop the best bid levels based on past history. This can be frustrating if the results don’t appear to be working effectively, but there are several options in Settings that advertisers can decide to use.

The bid control options for Smart Shopping campaigns are very limited. They have only ‘maximise conversion value’ as the bid strategy. This can be enhanced through the use of the tROAS setting, which can also be used with existing standard Shopping campaigns and require at least 15 conversions in a 30 day period..

ROAS is somewhat more relevant to Shopping than CPC because it takes into account the value of a purchase, rather than just the path to the purchase itself. Therefore if you have an ideal margin, so that for every $1 spent in advertising you want to see $5 in sale, the tROAS would be 500%.

Similar to setting a max click bid cap in standard campaigns, it’s best to set a target ROAS in a healthy spot above where the current ROAS lies, but also where the business’s priorities lie. Google’s system will require at least 14 days to adjust to any new setting, but this is some level of control that the advertiser has.

If you decide to use a Standard Shopping campaign then you will have more bid strategy options available, and a good way to enhance those is with the campaign priority setting.

However, it’s important to note that campaign priority is only useful when advertising the same product, for the same country in multiple Shopping campaigns. It’s used when product bids are required to come from a specific one of those.

To establish this process, simply set the campaign priority from Low (default) to Medium or High. 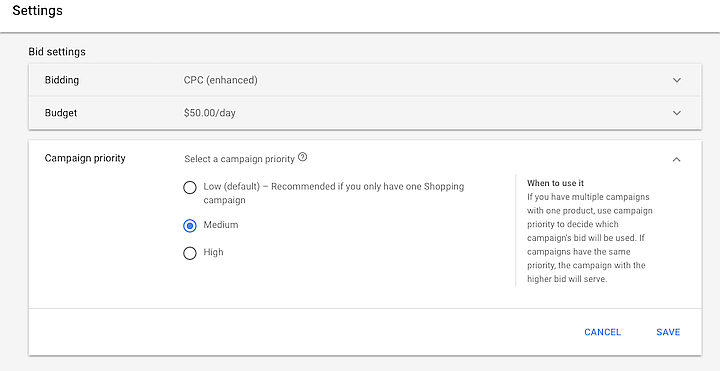 These priorities determine the bid for any product that the campaigns share, using these rules:

For both tROAS and priority bidding, it’s necessary to understand how the algorithm bids according to your target – i.e when the target is set higher, the system will tend bid lower to maximise the return (therefore, applying to the high priority/low bid campaign) and vice versa.

Both of these optional settings can make a significant difference to the way in which Shopping campaigns perform, so we recommend they’re used when applicable. However, whenever changes like this are added, make a note of the change and review the before and after metrics to see what difference is made, and revert back to the previous settings if the results tend to decline.

If you want to know how the use of enhanced Google Shopping bidding settings could help your business, please get in touch. We have been leading Google Ads / AdWords consultants since 2002.