Google has recently announced a change to the Call-Only advert option in Google Ads, which previously only allowed searchers to call a business and not visit the website. This lead to some confusion with users, so now Google has renamed these as ‘call ads’ and introduced the option to also provide a link to the advertiser’s website as well.

The option of call-only ads have been available in Google Ads since 2015 and were intended to build on the use of the call extension and give advertisers the option to only provide a click-to-call number in the ads. This was designed for advertisers who were likely to only attract calls – such as locksmiths or plumbers – so that searchers could quickly get in contact with a business service they needed.

Call only ads used calls in the same way as standard call extensions, so that any clicks on a phone number are shown as a Click Type in Segments. Advertisers can then use their own number or select conversion tracking to use a Google Forwarding Number (GFN), which would track the call details and show as a conversion if this met the required time of a call (usually 60 seconds).

Whenever possible, the GFNs used will share the same area code or prefix number as the advertiser’s business. Otherwise, a local number area code or prefix for the geographic region will be used instead. In some cases, a local GFN may not be available so that the ad will show a toll free GFN instead.

Any conversion will be reported as a conversion on the date that the ad was shown. For example, if someone views an ad on 5th April and writes down the GFN, but doesn’t call until 10 April and has a two-minute call with the business, then on 10 April there would be one phone call reported and a call conversion reported on 5 April because the call met the 30-second requirement, but the ad was shown and paid for 5 days earlier.

It’s worth noting that if the user calls the GFN within two hours, the call will connect. After two hours, the call will not be routed through to the business and the GFN may be reallocated. However, this is a rare scenario, as the vast majority of calls happen within five minutes of the user seeing a GFN in an ad or on a website. Also calls will still connect to the business for 60 days after the user’s initial call. Every time the user calls within that time period, the 60-day window is reset and the number will remain connected for another 60 days. After an entire 60 days expire, the number will no longer route calls to the business.

Of course, call ads appear only on devices that make phone calls, so that when a potential customer clicks the ad, the ad places a call to the advertiser from their device. The call is charged as a cost per click and with the call-only ads, there were no options for the searcher to view the advertisers website from this type of ad.

The outcome of these ads initially looked good, with an good increase in call clicks and conversions. However, on closer analysis the call clicks significantly overstated the actual calls received, so what appeared to be happening was that people clicking the blue ad link were not necessarily expecting, or wanting, to make a call at that moment and were possibly expecting to view the advertisers website first – as would be expected from a Google advert. As a result, some searchers would then cancel the call although this still recorded a click and conversion, but not an actual lead. 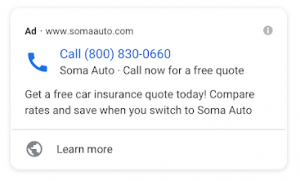 As a result, Google has changed the format and naming of these ads, so that Call-Only ads are now know as Call Ads, and advertisers have the option to add a link to their website as well, which is recommended. To create ads that allow both clicks to call and clicks to the website, advertisers can provide a final URL which will add a secondary link on the new Call Ad that will take users to the landing page that is specified.

While Call Ads focus on initiating calls directly to a business, advertisers also now have the option of providing a final URL, which will add a secondary user-facing link to the preferred web page about the business or service.

If you’d like to know more about using Call Ads in Google Ads, please get in touch.